JazmineMedia
Home Kpop Jinyoung Breaks His Silence For The First Time After Leaving B1A4 And... 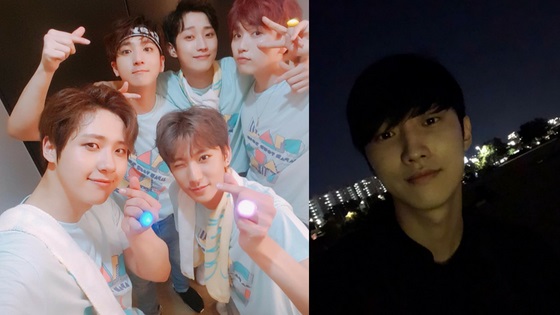 Fans were shocked when it was revealed that Jinyoung and Baro left B1A4 and their management agency after lengthy contract renewal discussion.

Not too long after fans found out, Jinyoung posted a sweet message to his fans.


He took to his instagram account to post part of B1A4’s fan song, the song is called “Together” and was part of their 2016 album “Good Timing.”

The special song was dedicated to their fan base also known as BANA. He quoted the first part of the song which reads,

“Look at the small stars

Hidden in the sky up high

We have no choice but to shine

It’s such a precious time

Yes, sometimes there will be a disappointment

But I’ll sing with my heart

We’ve shared joy and sadnessI love you, I love you

In the bright stars in the sky

Our love is there

Even if we get lost for a momentWe just need to trust in each other Yes, sometimes there will be disappointment

But I’ll sing with my heart

We’ve shared joy and sadness. I love you, I love you”


He wrote the caption,

Despite the sad news, fans have shown the idol-actor unwavering support as they cheered him on with their positive comments under his post. Many thanked him for being such a great leader while others expressed their sadness but wished him best.

How do you feel about Jinyoung’s departure from B1A4?