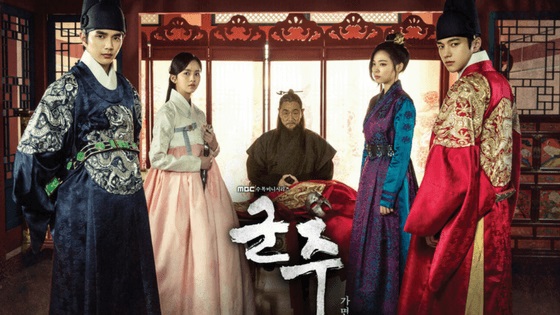 Ruler: Master of the mask premieres in less than 2 days and fans are so excited about the historical justice drama.

So before the drama airs, I thought it’d only be appropriate to refresh your memory and share some less known facts about the cast of the upcoming MBC historical drama.

15Kim So Hyun is 6 years younger than Yoo Seung Ho

Yup! You heard it right, seems like Kim So Hyun isn’t done being paired with much much older actors, luckily this time the age gap is only 6 years.

Lets see how well will our lead co-stars knock down that age gap of the window.

14Kim So Hyun and Yoo Seung Ho both started out as child actors.

Yoo Seung Ho debuted as an actor back in 1999, the same year our dear princess Kim So Hyun was born, he was only 6 years old then and he debuted as a model for a brand CF.

While Kim So Hyun started out as a child actress back in 2006 playing a supporting role in the 2006 Drama City special titled “Ten Minute Minor”.

Due to his resemblance to the famous South Korean actor So Ji Sub, he was dubbed the younger version of him; they met back in 2010 and worked on a CF together.

Yoo Seung Ho also starred in So Ji Sub music video for his comeback album titled “6 PM… playground” and played the younger version of So Ji Sub, which was back in 2013.

12Yoo Seung Ho fulfilled his military duties back in 2013

Unlike most kdrama actors who choose to delay their military duty until they’re 29, Yoo Seung Ho led a great example and entered the military back on the 5th of March 2013 and was discharged back in the 4th of December 2014.

You won’t have to miss the oppa when he turns 29, because he has already completed his military duties and is now focusing on acting in dramas and movies to solidify his status as an actor.

In an interview with Vogue Korea, the young actor revealed that his family used to be poor.

10Yoo Seung Ho thinks Park Bo Gum has it worse than him for being a kind person.

Yoo Seung Ho is dubbed one of the nicest Korean actors you’ll ever meet, but it seems like Park Bo Gum took that honor away.

He said in an interview with The Star:

“After meeting Park Bo Gum, I thought, ‘I have found someone who’s got it worse than me.’ If I never met him, I would have agreed [that he was indeed the nicest actor], but Park Bo Gum is really a good person.”

Believe it or not, or you might have just forgotten, but the lovely child actors actually starred together in a drama before.

Back in 2012-2013, they both starred in “I Miss you”, although Kim So Hyun played the younger counterpart of Yoon Eun Hye, and Yoo Seung Ho played an older version, nevertheless, they both have met before.

Time passes by fast because now Kim So Hyun is the leading lady of Yoo Seung Ho.

8Infinite’s L made his official acting debut back in 2012

Infinite’s L aka. Myung Soo has only stared acting recently; his first ever fixed role was in the 2012 drama “shut up flower boy band” in which he played one of the band members alongside Sung Joon.

7This is Infinite’s L first EVER historical role

Both Yoo Seung Ho and Kim So Hyun have done historical dramas and movies many times before, as young actors and when they grew older, but it isn’t the same case with Myung Soo.

In fact, he opened up about this during the press conference of the drama saying:

“Because this was my first historical drama, I watched a lot of [historical] movies and dramas. I will be taking on both the child and adult versions of my character”, “so I practiced showing the differences in tone, behavior, way of speaking, and going from a peasant to a king. I hope you will watch over me as I grow.”

6Infinite’s L is yet to have his first EVER leading role.

Since Myung Soo is fairly new to the kdrama scene as an actor, he is yet to have the chance to play the male lead of a drama, he is again the second male lead in this drama, and has also been the second lead in many other dramas before this one.

Let’s hope that once Myung Soo does well with this drama, he’ll finally move from being in a one sided love relationship to winning the lead lady.

The young actress has sure come a long way from being the nation’s little girl.

4Kim So Hyun was born in Australia

The young actress was born in Australia.

But back in 2003, when Kim So-Hyun was 5-years-old, she moved with her family to South Korea.

3Yoon So Hee was born in Germany.

Not only our leading lady that was originally born outside Korea before moving back in later on, but the second leading lady Yoon So Hee was also born in another country.

Yoon So Hee was born in Stuttgart, Germany back in May 7, 1993, which makes her the same age as Yoo  Seung Ho who is also a 93 liner but slightly younger than her.

2Yoon So Hee started her acting career back in 2013

Yoon So Hee is also a new comer to kdrama land; she has starred her first EVER role in a very small supporting role in the historical KBS drama The Blade and Petal back in 2013.

She has come a long way and is now the second female lead of Ruler: Master of the mask.

1Kim Soo Hyun admitted that Yoo Seung Ho is both shy and awkward.

In the press conference of this drama Kim Soo Hyun opened up about meeting her oppa after a long time, she said:

“It feels like there is hardly an age difference between me and Seung Ho. I did not see him very often when we first met, but because we have been together since we were child actors, I thought that we would be comfortable together.

However, when we met again after such a long time, it was extremely awkward because he was nervous and shy. I thought that he was just shy with strangers.

Once we got into filming, however, he was a charming and playful actor, so we matched well on set and had fun filming together. There are so many reasons I’m grateful [to work with him].”

Well we’re glad that Kim Soo Hyun and Yoo Seung Ho passed that awkward phase and are now working in harmony together.

So that was it for the facts article of the upcoming drama Ruler: Master of the mask. Which one of these facts shocked you the most?